The Jerome Roche Prize was inaugurated in 2001 in memory of the British scholar Jerome Roche (1942-1994). The prize is awarded annually by the RMA for an outstanding article by a scholar in the early stages of their career. Award winners are invited to deliver a keynote lecture at the RMA Research Students’ Conference.

Nominations can be made by any member of the RMA, and self-nominations are encouraged. We strongly encourage nominations that reflect the full diversity of music studies.

Articles should be in English, and either from a journal, an edited volume or a book of conference proceedings. Only one nomination per candidate will be accepted in any one year. The nominated piece of work must have been published in the previous calendar year; for example, for the Roche Prize 2022, the work should have been published in 2021.

Nominated work may have multiple authors, but in order to qualify, all of the authors must be early career researchers. We define early-career researcher as ‘someone who shall have received their final academic degree no more than five years before the publication date of the article or chapter submitted (allowing for recognized career interruptions)’.

Nominations will be considered only if they are accompanied by the article and an abstract, together with evidence (e.g. a c.v.) that the nominee can indeed be considered to be in the early stages of a career. These documents must be submitted to the chair of the Awards Committee (see RMA Committees), either electronically (in pdf format, with the article presented exactly as it appears in published form) or by post, in which case four copies are required.

Nominations and supporting documents should be received by 1 March. The Awards Committee’s recommendation will be submitted to the following meeting of Council, and, if approved, the award will be announced at the Annual General Meeting, held each September during the RMA’s Annual Conference. 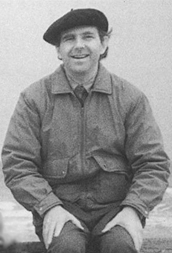 Roche taught at Durham University from 1967 right up until his premature death in 1994. He was remembered for his committed Catholicism, a ‘beatific smile’, and a range of nicknames from Roash to Jerosh to Roatch.