The Dent Medal, struck in memory of the distinguished scholar and musician Edward J. Dent (1876-1957), has been awarded by the Royal Musical Association annually since 1961 to recipients selected for their outstanding contribution to musicology. A list of candidates is drawn up by the Council of the Association and the Directorium of the International Musicological Society. 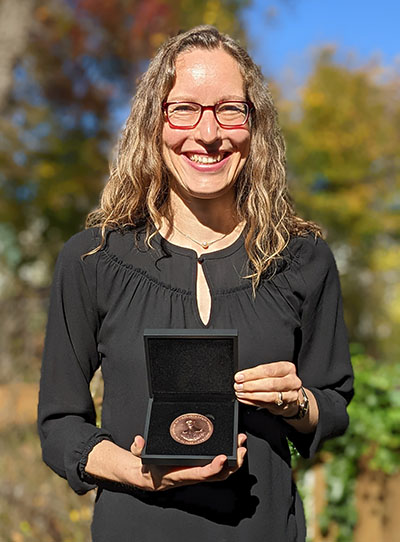 The Dent Medal for 2019 is awarded to Gundula Kreuzer.

Gundula Kreuzer gained her DPhil from the University of Oxford in 2004, subsequently holding a Junior Research Fellowship at Merton College before joining Yale University, where she is a Professor in the Department of Music. All of Kreuzer’s research has been highly acclaimed for genuinely reshaping the field, as has been acknowledged by several glowing reviews and prizes. Her particular interest has been in the reception and productions of music from the nineteenth century, especially that of Richard Wagner, as is demonstrated by her first two monographs. More recently, her attention has turned to the situation of opera in the digital age.

Kreuzer’s work combines extensive archival research with imaginative methodological and theoretical ideas to challenge presumptions about historical figures and music about which it had seemed little more could be said. Importantly, at a time of debates within and beyond higher education institutions about the value of studying all kinds of music, Kreuzer explains the significance of the canon, its contingencies and its limits. Her first monograph, Verdi and the Germans: From Unification to the Third Reich (Cambridge University Press, 2010), which examines the changing impact of the popular Italian composer on German musical self-perception and national identity, won the 2011 Lewis Lockwood Award of the American Musicological Society, the 2012 Gaddis Smith International Book Prize of the MacMillan Center for International and Area Studies at Yale, and the inaugural Martin Chusid Award for Verdi Studies in 2013. At Yale, she was awarded the Samuel and Ronnie Heyman Prize for Outstanding Scholarly Publication in 2010, as well as fellowships in centres for the humanities and in international and area studies. In 2015-16 she was a fellow at Columbia University’s Italian Academy for Advanced Studies in America.

In spring 2018, Kreuzer’s second monograph, Curtain, Gong, Steam: Wagnerian Technologies of Nineteenth-Century Opera, was published by the University of California Press. It has been heralded by academic and popular critics in America and Germany as a fresh and inventive contribution to the field (it was both one of Alex Ross’s ‘notable music books’ of the year and declared by Carolyn Abbate to be ‘one of the most exciting books on nineteenth-century opera to appear in decades’). Kreuzer has also been active as an editor, producing with Clemens Risi a double issue of The Opera Quarterly (‘Opera in Transition’, 2011) and a critical edition of Verdi’s instrumental chamber music for The Works of Giuseppe Verdi (Ricordi, 2010). From 2006 to 2010 she was Reviews Editor of The Opera Quarterly and she recently completed six years on the editorial board of the Journal of the American Musicological Society.